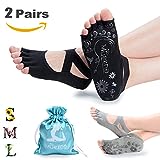 Muezna Socks Maximize Your Performance for Every Exercise! We just focus on originality & professional socks for everyone who loves to make exercise. Each style is always ergonomical and innovative design to sketch the contours of everybody’s feet and guarantees a effective non-slip functions. We seek fine art refinement and well construction details of each pair! Features: *Sexy Ballet Design with Elastic Straps: Elegant sexy straps prevent the socks falling off and make your design stylish and unique. *Why 5 Toes? : Toeless and 5 toes design make your toes touch the floor or mat, supplying a better tactile feel and balance. Meanwhile leaving no wick space for fungi and prevent athlete’s foot effectively. *Better Material: Made of 85% Combed Cotton,12% Spandex, 3% Binding cloth and 100% silicone gel grips on the bottom. *Coming with a mesh bag for usually carry and avoiding the pulling from machine wash. 100% Satisfaction Guarantee: If you’re not satisfied with our socks within 60 days of your purchase, we’ll refund your order without any question ask .