Gentle Yoga for Balance, Flexibility and Mobility, Relaxation, Stretching for All Levels [DVD]

These four 20-minute, calming yoga practices are easy enough that almost anyone can do them, yet effective enough to be a part of any regular exercise program to help improve balance, mobility and flexibility.

Create your own practice with our customizable menu: simply choose one, two or all four of the 20-minute sessions depending on your body’s needs and schedule. Flow continuously from one practice to the next or do them individually, whatever works best for you. No previous yoga experience necessary!

EQUIPMENT NEEDED: All you need is a mat and a sturdy high back chair for this program. To make certain poses easier on the knees or hips you may also want to use a bolster, pillow or additional folded yoga mat for added cushion.

FLOW 1: NECK AND SHOULDERS – This series is designed to let go of stress and tension to open up the neck and shoulders.

FLOW 2: BACK AND CHEST – This series is designed to release the spine and open the heart for pain relief and improved posture.

FLOW 3: HIPS AND KNEES – This series focuses on unlocking the joints and freeing the hips with a series of balance and mobility movements that work all the way down into the ankles and feet.

FLOW 4: TOTAL BODY – With an equal emphasis on all of your most important parts, this series offers a soothing, full body stretch. 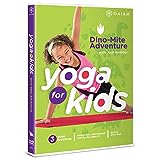