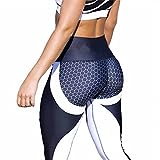 Soft and comfortable while you stretch your body.
Suitable for your indoor or outdoor exercise like yoga/dancing/body-building Exercise/jogging.
They are so comfy that you can wear them at your lazy day, fashion style for your normal wear.